Some strange happenings have been observed in the Memphis, Tennessee over the last couple of days. When I got in to town on Wednesday evening and started searching the federal bands, I came across a repeater on 415.2000 MHz that was keyed up all the time with a "beep-beep" about every 7 seconds. It was definitely coming from downtown Memphis, as I could get Close-Call hits from it and hear it without an antenna on the radio. This frequency is normally used by the Federal Protective Service in many cities and may still be used by General Services Administration maintenance operations in some areas.

On Thursday, while in Forrest City, Arkansas, the same constant-carrier with the "beep-beep" was heard on 409.3500 MHz while in that area. I was not able to determine where that repeater was located.

I actually sat and listened to the constant "beep-beep" signal on Saturday for a while. It appears that the repeater is still getting signals in to the input. I heard quite a few radio key-ups and actual voice transmissions, but it was like they were talking to someone that was never heard responding over the repeater. Most of the transmissions I did hear were maintenance related, i.e., getting doors unlocked, refrigerators not working, etc.. Again, I heard some units calling others, but would only hear one side of the conversation.

I know some repeater systems will transmit this "beep-beep" signal to indicate something needs attention, such as a commercial power failure, a control link failure or something along those lines. But what this means is a mystery to me!
Posted by Chris Parris at 2:24 PM No comments: 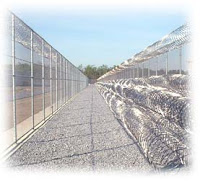 In the quest to document and build a database of Bureau of Prisons radio systems, there have been some BoP facilites that we just don't have any information on. Some are located in rural areas that just may not have any listeners nearby. This is probably the case for the Federal Correctional Complex in Forrest City, Arkansas.

I happened to be in nearby Memphis, TN and made a side trip over to see what I could find about the FCC Forrest City's radio system. Here is what I found:

The system is using P-25 digital voice and seems to be very busy.

This system information will be added to the Fed Files BoP Database that is available for download on the Monitoring Times website. It is in the "Readers Only" section of the site, and requires a password found in the latest issue of Monitoring Times magazine.
Posted by Chris Parris at 7:54 AM No comments: