I have been seeing reports of changes occurring in some of the US Bureau of Prisons (BoP) UHF radio systems in use at federal prison facilities. In some cases some frequencies have been changed, in others the entire system seems to have been replaced.

Most recently I heard from a source in Southern California that the Metropolitan Correctional Center San Diego may have a new radio system going on line. A new Motorola control channel was heard on the air on 408.6125 MHz, with a System ID of F008. Later the control channel moved to 410.0000 MHz with the same System ID.

It would appear that the system is being replaced to conform with the federal UHF 9 MHz channel offset, with repeater outputs being at the low end of the spectrum, and the repeater inputs being +9 MHz.

Also, reports of a new UHF trunked system have been reported on Radio Reference. A control channel has been heard on 406.2125 MHz in the Fresno County area. The control channel is reporting a System ID of EE2B. Not confirmed but the speculation is that it will be used by the new FCI Mendota:

Posted by Chris Parris at 9:55 AM No comments: 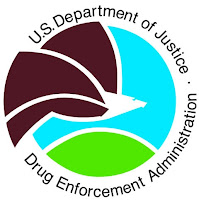 A couple of items regarding the Drug Enforcement Administration (DEA).

First, a reader sent me this link:

This is a document containing the minutes from a meeting of the Oklahoma Wireless Information Network (OKWIN) Executive Committee. In these minutes, the DEA requested access and talk groups on the new statewide radio system. This quote appeared in these minutes:

"The DEA currently has UHF frequencies to conduct daily business. They really want to use the system for interoperability, but see the benefits of using the system for day-to-day business so it would be “nice to have.” The DEA coverage is limited in the NW and SE areas of Oklahoma, just as the OKWIN system is limited. So there is no great increase in coverage area for them. Also, the DEA plans on using a new VHF system planned in the future and then only maintaining a presence on the OKWIN system for interoperability."

This triggered some questions about the DEA moving to a VHF radio system. I think they are referring to the DEA's participation in the federal VHF Integrated Wireless Network (IWN), of which the Department of Justice is the primary user. The DEA is using the IWN in areas that it is operational. (In the Pacific Northwest, the DEA had their UHF radios taken away years ago.) But in areas that are not served by the IWN (which is most of the country), they not only remain on UHF, but have started to migrate to new P-25 UHF frequencies.

Which brings us to the second item, and updated list of the UHF P-25 channels that listeners in Texas and other Gulf states are hearing:

It's also possible that the DEA will be going to the nomenclature of NET and TAC channels that many other DoJ agencies are now using. The NET channels will be repeaters and TAC channels being simplex.
Posted by Chris Parris at 9:28 AM No comments: