A few months ago, I posted that I thought I had heard someone on the BPA radio system identifying themselves as "DENVER", when in fact they were saying "KOD900 DITTMER". That's the name of the Vancouver, WA Dispatch center just south of 63rd and Hwy 99, also called the Ross Complex.

The Bonneville Power Administration is an agency under the U.S. Department of Energy. They operate a series of VHF repeaters in the Pacific Northwest that is normally used for transmission line and facilities maintenance. All of these repeaters operate on 172.5250 MHz.
Posted by Chris Parris at 6:05 AM No comments:

Can Tiny Scanners Be In Our Future? 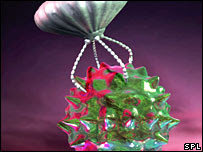 After reading this item from the BBC:

I've got to believe a tiny receiver / scanner using nano-techology can't be too far fetched! But will it trunk-track a P-25 system?!?
Posted by Chris Parris at 3:23 PM No comments:

I just noticed that the Radio Reference listing for the Justice Integrated Wireless Network (JIWN) now shows a site in Washington, DC.;

It is showing as Site 160, using frequencies of 168.2625 MHz and 168.8875 MHz. I have not seen any posts from anyone in the DC area about this yet. It may have just show up on the air recently, as it was not there a few weeks ago when I went through the area. Can anyone in the DC area confirm this?

UPDATE! - I did hear from someone who did confirm this site is on the air, and has a voice channel of 173.5500 MHz associated with it.

Seems like the IWN sites area popping up in new places, but so far not along the US/ Mexico border, which was officially stated as the next phase of the IWN project.

ANOTHER UPDATE! - I was passing through Dulles International Airport (IAD) today and was unable to pick up anything on either of the listed frequencies. Reports are that this site is not really strong as Reagan National Airport either, so the site may not be in DC proper.
Posted by Chris Parris at 9:01 AM No comments:

Previously these frequencies have been unassigned and became available because of the 12.5 KHz channelization of the federal 406-420 MHz band.

If you are curious about where the federal reserve banks and their branch banks are located, you can click here:

http://www.federalreserve.gov/branches.htm
Posted by Chris Parris at 5:27 PM No comments:

Since the TOPOFF 4 exercise is now finished, at least on the public side, I thought I would share what I found as far as radio communications in the Portland area...

Wednesday brought in more federal agency response, and more activity on the 800 MHz systems. It did appear that there was use of the federal IWN VHF trunked radio system. I noticed a "spike" in the number of radios that were affiliated to the trunked system on Tuesday and Wednesday. Voice activity that I was able to catch on the IWN sites was all encrypted, so I can't confirm who exactly was using the system.

I did catch some conventional federal frequencies in use during the week. While near the area that the dirty bomb explosion was staged, I caught some simplex P-25 traffic on 167.3875 MHz, most likely FBI units on scene. While parked near the TOPOFF operations center in Portland, I did catch quite a bit of P-25 encrypted traffic on 138.225 MHz, most likely FEMA. They were a big presence at the ops center, as well as the Federal Protective Service. They were active on 417.2000 MHz, P-25 in the clear.

An interesting side note - I have seen no postings or any information on line about the TOP OFF exercises in Phoenix or in Guam. I don't know how many listeners there might have been in Guam, but I'm suprised that no one heard any of the events in Phoenix I'll have more in a future Fed Files column...
Posted by Chris Parris at 8:53 AM No comments: