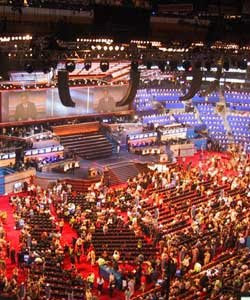 The Multi Agency Communication Center for the Democratic National Convention has begun operations in Lakewood, CO this morning. The MACC is set up in the Denver Federal Center to support all the federal agencies involved in the DNC. The lead agency for this National Security Special Event is the US Secret Service, a division of the Department of Homeland Security.

A similar communication center will be established in St. Paul, MN for next month's Republican National Convention.
Posted by Chris Parris at 12:08 PM No comments: 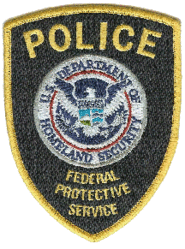 The process of re-farming the federal UHF channels continues with the shuffling of radio frequencies used by the Federal Protective Service (FPS). The FPS is a division of ICE (Immigrations & Customs Enforcement) under the Department of Homeland Security.

In most areas, 415.2000 MHz, 417.2000 MHz and 419.1750 MHz serve as the primary radio frequencies used by the FPS. However, some areas have begun moving towards repeater output frequencies in the 407 - 410 MHz area. This is due in part to the federal requirement of a standard 9 MHz repeater offset, so input frequencies are +9 MHz.

I have noted changes in the FPS radio system in some eastern US cities over the last year or so, but changes recently came to the Pacific Northwest, where I make my home. In the last week the FPS has moved to repeaters on 407.0000 MHz, 408.2000 MHz and 410.8000 MHz in the Portland, OR area. Reports are that the Seattle / Tacoma area has or will follow soon. Keep the 415.2000 MHz and 417.2000 MHz channels in, as they may be used as simplex talk-around channels. And all these repeaters are APCO P-25 digital mode.

Keep an ear open in your area for FPS frequency changes!
Posted by Chris Parris at 4:53 PM No comments:

According to new reports, FEMA had someone hack access to the federal agency's internal phone network and placed calls to the Middle East and Asia.

The story can be found HERE.
Posted by Chris Parris at 11:59 AM No comments: