I'm usually out of town for most of the annual Rose Festival Fleet Week, but I just made it back to get a chance to watch some of the US Navy ships that were docked in Portland depart the area this morning.

When heading across the river on Sunday evening, I was searching the 390-400 MHz band for any possible shipboard trunking systems, I came across an EDACS control channel on 397.6 MHz. This was coming from the USS Chosin, CG-65. I decided to try and come back to the area for the ships departure on Monday morning and see if I could figure out the trunked system setup.

Came back early on Monday morning before the bridge lifts to let the ships head out to the Columbia River screwed up traffic too much, I found a good parking spot where I could see and hear the ships. I noticed right away that these shipboard trunked systems are not designed to carry very far, so even with the ship in sight, the signal strength from theses systems was pretty weak, but readable. I also discovered a second EDACS control channel belonging to the USS Cape St. George, CG-71.

Other frequencies in use: 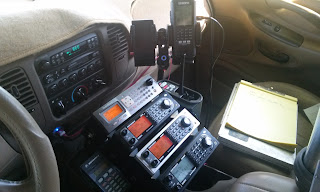 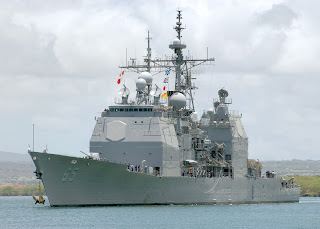 Posted by Chris Parris at 6:33 PM No comments: