NLE is the new FEMA designation for what were the TOPOFF exercises. This exercise is scheduled to involve FEMA Region VI, which includes the states of Arkansas, Louisiana, New Mexico, Oklahoma and Texas. Additional detail will be coming as the exercies planning continues.
Posted by Chris Parris at 12:03 PM No comments:

And speaking of the Federal Protective Service;
http://voices.washingtonpost.com/federal-eye/2009/07/gao_finds_major_security_flaws.html?hpid=topnews

According to the above linked article, the FPS is under fire for not providing the level of protection that Congress is expecting. Testimony indicates that investigators have been able to walk around freely in federal building and even smuggled simulated explosives past security checkpoints.

Further down in the article there is mention that the FPS will be transferred out of the juristiction of ICE and become part of the National Protection and Programs Directorate, a collection of agencies tasked with assessing security risks;
http://www.dhs.gov/xabout/structure/editorial_0794.shtm
Posted by Chris Parris at 9:00 AM No comments: 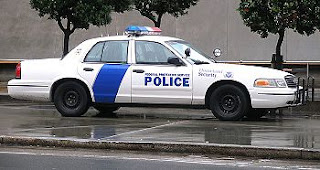 I have received reports from some areas that Federal Protective Service vehicles are beginning to sprout VHF hi-band antennas in addition to the normal UHF antennas used for the FPS radio system. So what are these antennas for? The FPS car pictured here seems to have a four-antenna array for LoJack tracking or something similar. The reports I've received are usually referring to single VHF quarter-wave or 5/8 wave gain antennas now showing up on vehicles.

Some suggest that they are getting VHF radios for multi-agency interop capability. Others have suggested that the FPS has been and is using the CBP Customs nationwide VHF radio network. I have not personally confirmed this and have not heard any traffic that could be FPS, so I'm not sure about this one.

The FPS, under Immigrations and Customs Enforcement in DHS, currently operates on a national UHF radio system that is dispatched from regional Mega-Centers. Most cities have switched to (or will soon) P-25 digital. Here are the known UHF frequencies utilized by the Federal Protective Service.