Listeners along the Blue Ridge Parkway in Virginia and North Carolina have started to report that the US Park Police that patrol the BRP have switched over to new P-25 digital repeaters for their patrol operations.

While vacationing in North Carolina I came across at least one new P-25 frequency that appears to be the Blue Ridge Parkway patrols. I heard 172.7250, N120 while traveling from Charlotte to Asheville, NC. They appear to have stopped using their old frequency of 167.1750 MHz that used to be heard all over the area.

Here are a list of the frequencies that have been reported as active along the route of the Blue Ridge Parkway:

Posted by Chris Parris at 6:09 AM No comments: 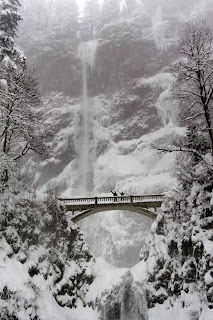 A very Merry Christmas and Happy Holidays to all the Monitoring Times and Fed Files readers out there.

Holiday travel has been a challenge for me this year, due to the snow and ice in the Pacific Northwest. But things look like they are starting to settle down and hopefully return to a normal, wet winter!
Posted by Chris Parris at 12:27 PM No comments: