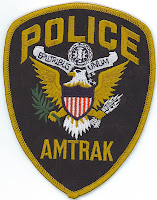 I'm currently working on a show in New York City that has us parked near Penn Station in mid-town Manahattan, and there are usually 3-6 AMTRAK police vehicles parked in the area between Penn Station and Madison Square Garden. This got my interest up in what AMTRAK police officers were using for radios.

I've seen requests on some lists for information about AMTRAK police operations and frequencies. A search of the Internet turns up little information, but I decided to try and piece together as much of it as I could. I think I saw a thread on AMTRAK police on the SCAN-DC list a while back. The frequencies of 173.3500 MHz and 173.3750 MHz came up, and someone pointed to an archived edition of the Capitol Hill Monitors newsletter that has some great info on the AMTRAK police radio channels: http://henney.com/chm/0299/.

Here on location, I have been hearing what appears to the AMTRAK police operations on 161.2950 MHz, 131.8pl. There have been a few incidents over the last few days at Penn Station involving NYFD units, but nothing that seems to have made the news.

Got any confirmed AMTRAK police frequencies you want to pass along? Send them to the Fed Files and Monitoring Times!
Posted by Chris Parris at 9:22 AM