A recent posting by Customs and Border Protection (CBP) reports the capture of a group smuggling marijuana across the southern Arizona border with Mexico. The Yuma Sector was involved in the arrest:

Photos that accompanied this report on the CBP Twitter feed showed the radios and batteries that were seized during this arrest. 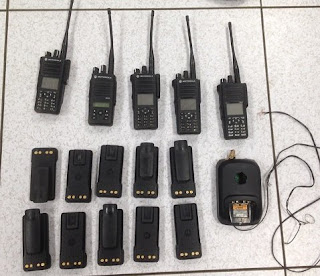 The CBP photo shows several models of Motorola TRBO digital radios, probably UHF. I'm wondering if they will do any forensic radio analysis and see what frequencies they were on.

The drug cartels in Mexico have long been known to use radios, and not just portables. A while back, there was a wide-area radio system with linked repeaters that was reportedly build by a company in Houston, Texas. It was operating in an unusual part of the UHF military air band and was fully encrypted, of course.

Which brings me to a recent discovery when I was in Arizona. I left my radio searching unattended while parked at a fairly high altitude near the Mexican border. I recorded a number of encrypted DMR hits on unusual UHF frequencies. I caught quite a bit of traffic on 403.2500, 403.3500 and 403.4500 MHz. All the communications I recorded were using the same talk group number (116), so this might be part of a trunked system. Is this really related to drug smugglers? Who knows, but an interesting catch none the less...