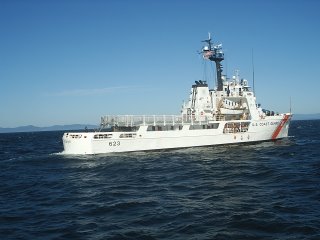 I was in the Astoria, Oregon area this week and caught the USCG Cutter Steadfast, "El Tiburon Blanco", getting ready to ship out.

While in the area I caught some new frequencies (new to me anyway):

Most of the helicopter and surface ops were on the VHF marine channels, but I did catch Group Astoria ask one helo (6030) for a check on 5 Mhz - I did catch them on 5.696 MHz.

And finally, while watching the Steadfast getting ready to depart, I noticed that the guys on deck were using UHF hand-held radios. Found them on 464.5500 MHz, 67.0 pl !?!
Posted by Chris Parris at 9:48 AM No comments: