An interesting article has appeared on line talking about the roll out of the new IWN DC area overlay trunked system:

As I posted back in September, the new VHF IWN trunked sites started to appear recently in the Washington DC area, and will serve various subscriber agencies, primarily the Department of Justice. However, the article linked above indicates that the Department of Homeland Security (DHS) will not be participating in the DC area system.

Some DHS agencies are participating in the original IWN sites in the Pacific Northwest, with CBP Customs and Border Patrol being heavy IWN users along the US-Canada border areas.
Posted by Chris Parris at 1:50 PM No comments:

LA USSS Back On The Air 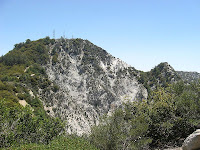 On Monday, November 30th, while waiting for a flight at LAX airport, I had time for some scanning. While searching the federal bands I happened to catch some radio techs doing checks on the Los Angeles area US Secret Service radio sites. This comes after one of the sites serving the LA Metro area was destroyed by wildfires in August, 2009.


I caught some clear radio checks on:

When they were finished, one technician proclaimed that they were "finally back on the air after a year and a half!"
Posted by Chris Parris at 8:56 PM No comments: