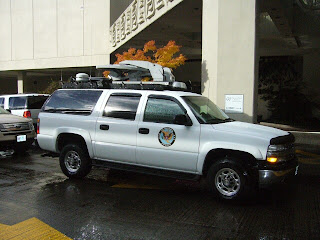 I had a chance to do some monitoring and observations of the TOPOFF 4 exercise in the Portland, Oregon area this week and thought I would post some information.

The events started Tuesday, with the simulated explosion of a dirty bomb in downtown Portland on the Steel Bridge. The staged event took place on a simulated bridge with wrecked cars and a bus, all located at the Portland International Raceway along I-5 north of town. They had a large compound of tents and support vehicles for this event, but they kept the gawkers away by prohibiting any parking where you could sit and watch.

The activities on Wednesday focused on recovery, decontamination and criminal investigation of the event. Lots of federal and military presence during the exercise on Wednesday. Some EPA air monitoring vehicles were staged at the Portland airport. Several very interesting FEMA vehicles were spotted around the city, including a mobile commmand post located at the TOPOFF Command Center, which was at the Doubletree Hotel in downtown Portland. Many DHS and military vehicles were parked around the hotel and clogged the entrance to the parking ramp. :-)

I'll update this blog with more info as I find it...
Posted by Chris Parris at 7:20 AM No comments: