Activity surrounding Super Bowl XLVII continues in New Orleans. There have been some indications of increased federal and military helicopter activity around the Mercedes-Benz Superdome, the site of the big game.

Today we had multiple passes of the Department of Energy Bell 412 helicopter with what appear to be sensor pods on each side. 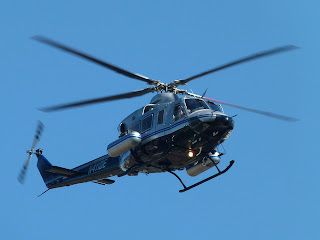 This photo is of a similar helicopter that was spotted overflying the Washington, DC area prior to the Presidential Inauguration.

UPDATE:
Beginning Thursday, 1/31 I finally started hearing some activity on the Federal Interop repeater on 171.4375 MHz, N653, known as "NO FIO", part of the DoJ 25 Cities Project. Many radio tests and some references to the "JTOC" or Joint Tactical Operations Center. I haven't been able to sniff out much pre-game information about the JTOC in New Orleans this year in the local media.

In addition to the many agencies on site here at the Superdome, one interesting one is the Strategic Petroleum Reserve Security Police. They are providing K9 support at vehicle checkpoints. The SPR Security vehicles are sporting VHF hi-band antennas, but haven't heard anything specifically from them yet. 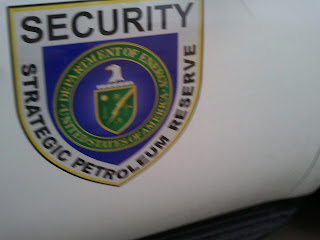 Posted by Chris Parris at 12:13 PM No comments:

As things get busy in DC for the Presidential Inauguration, you can look for updates at this thread on Radio Reference:

I am headed to New Orleans for Super Bowl XLVII coverage, so I will try and post some updates from the Big Easy over the next couple of weeks...
Posted by Chris Parris at 12:01 PM No comments: