On Saturday, May 2nd, what was touted as the Fight of the Century between Floyd Mayweather and Manny Pacquiao took place at the MGM Grand in Las Vegas. Due to the intense attention this event was bringing, there were some extra security measure taken, involving local law enforcement and even some federal agencies. 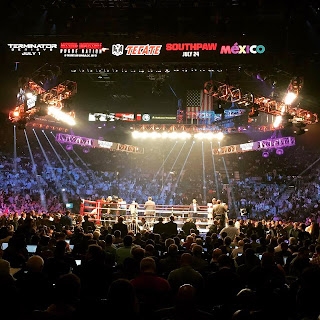 The TSA at McCarren Airport in Las Vegas was prepared for the onslaught of visitors to Las Vegas for the weekend of the event, as well as the flood of travelers leaving on the Sunday after the fight.

And it appeared that the FBI was maintaining some presence at the fight. On Friday, May 1, I heard several radio checks that seemed to come from near the fight location at the MGM Grand. I heard some references to downlink video being set up and heard one station ID as "Command Post". On fight day, I also hear some additional radio checks but nothing more. Fredquencies heard were 163.8875 MHz, N167 and 167.7375 MHz, N167.

I also heard some TSA units that were possibly on location at the fight venue, possibly members of the Behavioral Detection Unit (BDU). They were on 169.3000 MHz, N013.
Posted by Chris Parris at 9:55 AM No comments:

In the May 2015 issue of The Spectrum Monitor, the Federal Wavelengths column featured my first attempts at collecting federal radio identification numbers or RID's. I've started a page here on the Fed Files Blog to collect and catalog the RIDs that have been collected. You can see a link to this page in the top bar of the blog home page, or follow this link:

I've just recently acquired a new Whistler WS-1080 scanner that displays RID's effortlessly, so hopefully I can add to this list more in the near future.

If you have any federal radio ID's that you would be willing to add to this catalog, just email me at the address on the blog front page.


Posted by Chris Parris at 9:40 AM No comments: