A recent posting in the Federal Business Opportunities website, https://www.fbo.gov/index?s=opportunity&mode=form&id=25449a5f51bc288d1209e4bdb8be0281&tab=core&_cview=1
was sent to my attention.

It appears from the description that the Transportation Security Administration (TSA) is interested in changing out all of their radio equipment from VHF to UHF frequencies. The TSA has just recently gone through an agency-wide upgrade of their VHF radio infrastructure that included new BK radios and equipment. The information provided by the TSA includes this data on thier radio systems:

Several folks have inquired as to why they are moving. One suggestion is that the FAA, who shares many of the TSA frequency allocations, was wanting the VHF channels back. I also think that there are more available channels in the federal UHF band (406-420 MHz) than there are in the VHF (162 - 174 MHz) band.

Posted by Chris Parris at 2:58 PM No comments:

US Park Police in DC Move to P25 Finally

It appears from postings on the Scan-DC mail list that the venerable US Park Police analog radio system may have finally met it's demise.

For some time the Park Police in Washington DC have been using analog FM for their radio transmissions. They have continued to use analog radios long after nearly every other federal agency in the DC region has moved to various forms of digital radios. The analog Park Police frequencies also have long history of being heard over quite an large area around the DC area, and could often be heard into the Philadelphia and even New York City on some occasions.

The new, encrypted, P25 digital frequency lineup for the Park Police will include the following:

No information yet on P-25 NAC or radio IDs for the Park Police.

Special thanks to the Capitol Hill Monitor newsletter for keeping up with new developments on this: 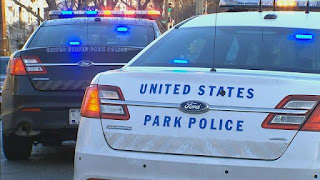 Posted by Chris Parris at 9:50 AM No comments:

Over last weekend I noticed reports on Radio Reference of a new VHF trunking control channel being heard in Virginia around the Washington DC area.

Keep an eye on this system as more information comes in: https://www.radioreference.com/apps/db/?sid=10266
Posted by Chris Parris at 9:34 AM No comments: