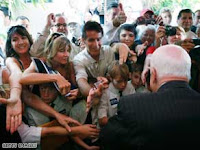 Despite claiming not to want the protection of the Secret Service, I have seen reports that Senator McCain might have actually had some sort of security detail with him on the campaign trail. But some have reported that he had the US Capitol Police with him, others claimed it was the FBI and one posting even seemed to think the US State Department was somehow involved with security for McCain. I haven't seen any hard data to support any of these theories.

The other political candidates, Clinton (both Bill & Hillary) and Obama, currently have Secret Service protective details. The big question now is what will Senator McCain's call sign be?
Posted by Chris Parris at 8:15 AM No comments: