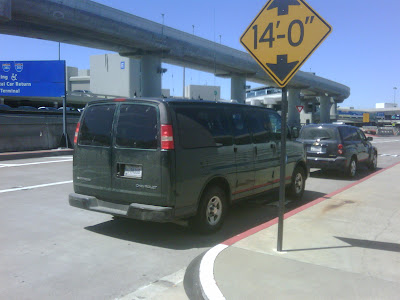 While running between terminals at San Francisco International Airport (KSFO), I spotted a van literally covered with antennas. The van carried federal GSA license plates, but when I got along side, it had well worn FAA decals on the doors.

You probably can't tell by the cell-phone camera photo I snapped, but the van had 12 to 15 antennas cut to almost every radio band you can think of, including what appeared to be a CB antenna. I'm sure this van is used by the FAA electronics support technicians, but it sure looks like they enjoy radio of all types & frequency bands.

The smallish SUV in front of the radio van was also an FAA vehicle, but carried no antennas that I could see.
Posted by Chris Parris at 7:13 PM No comments: 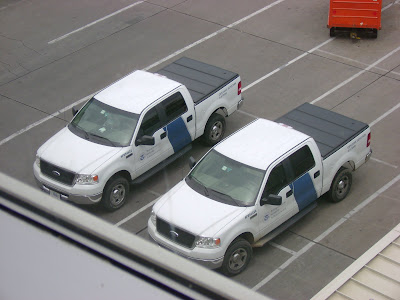 I've started noticing some changes in the TSA communications in my area and wondering if the same is happening in other areas as well.

Until recently, all of the TSA P-25 communications at my home airport of Portland, Oregon (KPDX) have been unencrypted. Simplex communications at all the security checkpoints has been on 172.1500 MHz, with different NAC's for each, and some administrative type communications have been heard on a repeater on 172.9000 MHz, N001 (169.3000 MHz input). About three weeks ago, I started hearing a lot more activity on the 172.9000 MHz repeater, but it was all encrypted. Until that time, I was only catching some random, brief encrypted traffic when someone accidentaly switched the secure mode on.

With some exceptions, most TSA traffic seems to be in the clear. San Diego has been encypted for quite a while now, and perhaps others.

While I'm not sure if this might be related, but I recently spotted some marked TSA vehicles that indicate they are operating more than just baggage screening and passenger checkpoints. The new-looking trucks were marked "EXPLOSIVE DETECTION K-9 TEAM", and were parked on the ramp area of a major aiport. Could these secure communications be tied into more activity by TSA activity not normally seen by the public?
Posted by Chris Parris at 12:03 PM No comments:

On a recent trip to the Chicago area, I discovered that the Federal Reserve Bank in Chicago is using Mototrbo radios on 406.6625 MHz.

Mototrbo is a product line of digital radios marketed by Motorola. It is not compatable with any of the digital scanners available today.

The Federal Reserve seems to have a habit of doing their own thing when it comes to radios. Each branch of the FRB has something different, some analog, some digital and now some are Mototrbo. It still amazes me that they would go against the APCO P-25 standards the have been championed by the federal government for interoperability. But on the other hand, who would they have to be interoperable with?