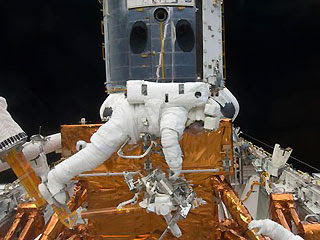 I have been asked about possible shuttle EVA communications frequencies that could be monitored while the shuttle Atlantis is overhead. Although you would need to be in just the right place, it is possible to catch some traffic from the space shuttle on their UHF frequencies.

296.8 MHz, 259.7 MHz and 279.0 MHz are the three UHF simplex frequencies that are used by the EVA astronauts while outside the shuttle. The shuttle communications system relays these frequencies down to earth via S-band, Ku-band or TDRSS links.

To the best of my knowledge, these are not encrypted and are AM. There was some reserch being done a few years ago about replacing the EVA radios with something new and possibly digital in the 400 MHz band, but I don't know where that project is currently (my NASA sources have moved on to other careers).

Here are some good links to the NASA web site that deal with shuttle EVA and flight communications:

http://spaceflight.nasa.gov/shuttle/reference/shutref/orbiter/eclss/emu.html
Posted by Chris Parris at 11:47 AM No comments: