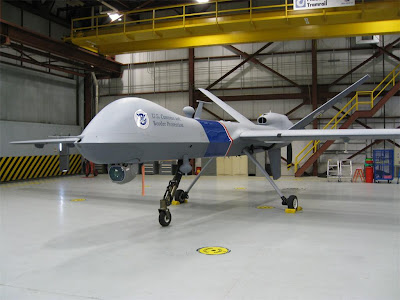 Reports are that the DHS Customs & Border Protection directorate are now using Predator B unmanned drones to keep the northern New York state border under surveillance. The full story can be seen here:
http://www.newswatch50.com/news/local/story/Homeland-Security-drone-patrolling-NNY/8ujqf9M2YkCXVlOmBVxFOg.cspx

Reports had been that the CBP had several of the drones available for their use, but never where they were being used. The story indicates that these drones are not permanently based in New York state, but are being used for training and evaluation.

Local scanner listeners should keep an ear out on normal VHF air traffic control frequencies, as the drone should announce it's location to surrounding air traffic, or it's presence should be announced in warnings by local ATC.
Posted by Chris Parris at 1:20 PM No comments:

Has anyone else noticed a marked improvement in scanning the federal bands since the turn-off of analog full power TV stations? In the last couple of weeks, I have traveled to New York City, Los Angeles and Tucson, AZ and noticed that both my Uniden radios and GRE/Radio Shack scanners are not getting clobbered by interference and images in the 162-174 MHz band like they used to.

Normally all of my newer P-25 capable scanner would exhibit lots of signal level on their S-meters while scanning through the VHF bands, even when no signal was being received. I've always believed that this was a result of the front end of the radio being overloaded from high levels of RF. But I also believe that the problem was a result of the scanners receiver design and not the TV stations. Problems from this overload included low sensitivity and images of the wide-band FM audio sub carrier on some VHF frequencies. These have all seemed to vanished since the analog transmitters have shut down. Even at my home listening post, where I have a direct, line-of-site view to all the TV stations in the Portland, OR area, things are very quiet across the VHF federal and UHF military air bands.
Posted by Chris Parris at 10:42 AM No comments:

It was recently announced that they next meeting of the G20 Summit will be in Pittsburgh, PA on September 24th and 25th.

These summit meetings are usually great monitoring opportunities for not only federal agencies, but local and state agencies as well. These events also seem to attract the anarchists and professional protesters as well. Security will be tight for the meeting dates and the days leading up to them as well.

There are some very good folks monitoring things in the Pittsburgh area, so we'll see what comes up during this event.
Posted by Chris Parris at 10:38 AM No comments: