testbed trunked system operated within the state of Washington, but now the system has started to creep south into the Portland, Oregon area. Last week several new P-25 VHF control channels suddenly hit the airwaves. A group of us in the area have started trying to map out these new sites as they come on line, and here's what we've found so far:

This information is very preliminary. We've been hearing the radio techs setting up these new sites and testing various systems. Some of the sites have not been activated yet, so more frequencies will be coming soon. Most of the traffic has been un-encrypted, but encryption has been the primary mode on the rest of the JIWN system.

Press reports indicate that final contracts for this nationwide JIWN project may be finalized by early 2007, so we'll see when this system starts appearing in other parts of the country.
Posted by Chris Parris at 11:06 AM No comments: 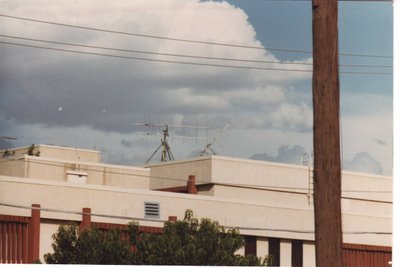 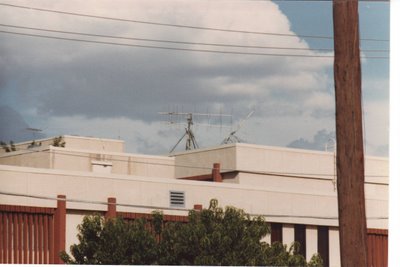 While going through some files yesterday, I came across a couple of photos I shot back in 1983 on a driving trip through El Paso, Texas. These are some of the antennas that were on top of the El Paso Intelligence Center, or EPIC. EPIC was and is still a major coordination center for the border interdiction efforts of the DEA, Coast Guard, Customs and other agencies. At the time I took these photos EPIC was located along I-10 in mid-town El Paso, but since has been moved on to the Fort Bliss military base.

You can click on the photos for a closer look at the UHF satcom antennas.
Posted by Chris Parris at 9:33 AM No comments:

While searching through the federal UHF band (406.1 to 420 MHz), I often run in to frequencies used by the US Postal Inspection Service. The most common channels used by the Postal Inspectors have been 414.7250, 414.7500 and 415.0500 MHz. However many cities are in the process of upgrading to P-25 digital radio systems and many cities have changed frequencies. The Postal Inspection Service has also moved to 2 regional dispatch centers that they are calling NLECC, or National Law Enforcement Control Centers. Many listeners have reported hearing NLECC (heard as"En-Leck") calling various "IDA" units in the field.

This week I am hearing NLECC Fort Worth doing some radio tests in the Portland, Oregon area on 407.1375 MHz. This frequency has been noted in the past with occasional traffic, but was always encrypted. So far most of these tests with NLECC Fort Worth and Portland have been in the clear, but we'll see how long that lasts.