I'm spending a little time searching the airwaves in the Southern Nevada region. I seem to have stumbled upon yet another 400 MHz trunking system in or near the Las Vegas area.

All communications so far have been clear. I did hear CONTROL do a roll call of units  NH-1, through NH-5. Lots of first names as call signs and mentions of new furniture going in the pharmacy. My first thought might be the Veterans Affairs Medical Center, (Nellis AFB and the Department of Energy maintain medical facilities as well).

The federal UHF band is pretty saturated with multiple trunked systems and conventional channels. There are already 3 wide-area UHF trunked systems covering Nellis Air Force Base and their associated ranges (P-25), the National Nuclear Security Administration and their associated ranges (Motorola Type II) and the Nevada Test & Training Range (EDACS). The frequencies associated with this new system have not been logged by myself in the past.

UPDATE: It appears that this is the new radio system for the new Las Vegas VA Hospital on Pecos Road, scheduled to open in August of 2012. I was able to confirm that the control channel for this new trunked system was emanating from here. 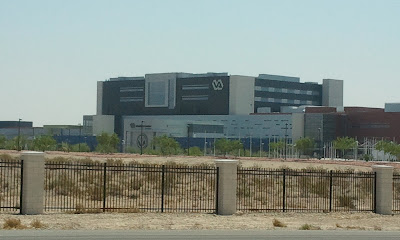 Posted by Chris Parris at 10:05 PM No comments: